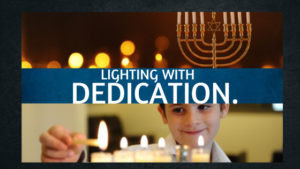 What is the proper time for reciting Haneiros Hallalu? Clearly, the intended time for recital is at time of lighting the menorah. There are differing opinions, however, as to the precise placement within the menorah lighting process.

Generally, all are in agreement that nothing at all is to be said between the conclusion of the recital of the Berachos and the action of lighting the very first candle or wick. Resultantly, the first night of Chanukah contains no room for practical disagreement. The question pertains only to the following nights, in a situation where multiple lights are being lit. In this case, there are two prevalent customs. One practice is to begin Haneiros Hallalu immediately after the first flame has been successfully lit and the fire has taken hold, reciting while kindling the remaining flames. The alternative practice is to wait until one has completed kindling the full number of lights due on that night before reciting Haneiros Hallalu. Both of these practices have strong Halachic backing.

Wherein lies the reasoning behind these divergent approaches?

Beracha is not a freestanding statement but rather one said in direct connection with an action being performed or the occurrence of an event. By way of illustration: A Beracha on a food item, while acknowledging and praising Hashem for the vast array of food items he has given humanity, is nonetheless only said in direct connection with an act of consumption. A Beracha thanking Hashem for the fine fragrance of flowers is only recited when one is actually smelling those very same flowers. Were one to speak between the Beracha and the first bite of food, or first smelling of the fragrance, those words would act as a break between the two, severing the connection. The ensuing result would be the rendering of the Beracha a Beracha Le’Vatala, an improper and useless Beracha, and thereby a recital of Hashem’s name in vain as well. A new Beracha would then have to be recited before partaking of the food or fragrance.

The same principle holds true in regard to Berachos on the performance of mitzvos. The Beracha is said as a component of the act of mitzva, and must therefore be recited in direct proximity to the act of mitzva. The speaking of even a single word between the beracha and the action would sever the bond between the two, render the beracha invalid, and require the recitation of a new Beracha before performing the mitzva.

As such, be it lighting the Menorah or any other mitzva, such as shaking Lulav and Esrog, counting Sefiras HaOmer or other, nothing may be uttered between the Beracha and the act of mitzva. The only exception would be in regard to saying something necessary for the performance of the mitzva itself, such as asking for help with replacing a wick or a similar request. Although this as well is ideal to avoid, should one speak in this regard, it would not be problematic. Speech such as this can be viewed as a part of the Mitzvah fulfillment, rather than a deviation from the matter at hand.

Having established the rules of speech in regard to prior to beginning the act of mitzva, the next step is to discuss speech while in midst of performance of the mitzva. A classic case in this regard is that of speech while in midst of searching one’s house for Chometz. In this category, the rules are somewhat more relaxed. Although it is most ideal to avoid unnecessary speech altogether, thereby allowing the Beracha to connect with every portion of the act of mitzva in entirety, nonetheless, if one did speak about

unrelated matters, he would not effect a Beracha Le’Vatala, nor would he be required to make a new beracha. The rationale here is that although the speech serves as a “hefsek”, a break between the beracha and a portion of the mitzva, since the beracha has already successfully taken hold with the initial act of mitzva, it is a true and valid Beracha and no further beracha will be required.

Returning to the Mitzva of lighting the Menorah, the same holds true. After the first lit flame has taken hold, the act of Mitzva has, on some level, already been performed. Although one is very much still within the action of Mitzva, speech at this point falls within the somewhat less sensitive category of speech in midst of a Mitzva as opposed to the more sensitive category of speech between the Beracha and the beginning of the Mitzva action.

As stated, even in midst of a Mitzva speech is to be avoided unless directly necessary for the performance of the Mitzva. The recital of Haneiros Hallalu, although a truly beautiful expression of the concept we wish to express with the lighting of the Menorah, would not seem to be integral to the act of lighting. This, then, is the rationale of those of the first practice. As Haneiros Hallalu is viewed as complementary yet non-essential and should as such not be recited until the Mitzva has successfully been completed. Only after the full number of flames have been kindled is Haneiros Hallalu.

What about the opposing view? Why begin Haneiros Hallalu at a point where it would seem unwarranted?

Perhaps it would be possible to explain this view by way of a rather cryptic statement found in one of the preeminent Rishonim, the Mahari”l. The Mahari”l1, when describing the Menorah lighting process, states the following:

“They have the custom to recite the Berachos… and subsequently, to stipulate [in regard to the flames] Haneiros Hallalu“

Throughout the discussions of the laws of lighting Menorah, a recurring theme with a variety of practical applications is that which Chaza”l were concerned that the lighting might accidentally appear to the observer as a casual act of lighting up one’s home. Certainly in time periods prior to the advent of electricity, and to a degree in certain situations yet today, a person might choose to light candles simply to increase light within his abode. If the Menorah lights would be thus mistaken, it would run counter to the very fabric of the Mitzva, the concept of Pirsumei Nisa, publicizing the great miracles which Hakadosh Baruch Hu performed for us. To this end, several laws were enacted to prevent this impression. As an example, one who lights Menorah will holding the Menorah in his hand will not fulfill the Mitzva, even upon subsequently setting it down, for this very reason. Holding the Menorah in one’s hand lend indication to the observer that one intends to use this light around the home, carrying the light around as necessary. The light would appear as one of practicality, and would fail to convey any unique message.

“These flames which see are lighting are in regard to the miracles and salvations which You performed… Theses flames are Kadosh, designated, and we are not permitted to use them, being allowed only to view them”

The expression of Haneiros Hallalu, then, can be understood not merely as a complementary expression of praise, but rather as a very integral stipulation that these flames are for a dedicated cause. They are not, and should not be confused with, standard household lighting.

As an integral part of the Mitzva, a necessary way to allay misperception, it is far easier to understand the custom of those who recite Haneiros Hallalu while kindling the remaining lights. Rather than a hefsek, a deviation from the act of mitzva, it is to be viewed as a component, and ought to be recited while in midst of performance of the Mitzva, so long as the first flame has already been lit.

This article was prepared based on a shiur by Rabbi Yechezkel Elias. Rabbi Elias is a member
of the Montreal Community Kollel, and a Maggid Shiur at the Yeshiva Gedola of Hampstead. Rabbi Elias’ daily Halacha Shiur is available on www.torahdownloads.com