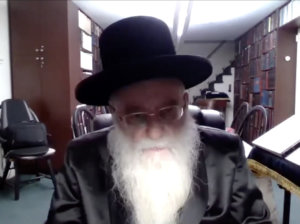 (Montreal, March 31, 2020): On Monday night Rabbi Binyomin Weiss, the Chief Rabbi of Montreal and the Av Beis Din of the Rabbinical Court of Montreal, spoke virtually with close to 1000 members of Montreal’s Jewish community and answered questions submitted electronically by participants. In his remarks, he stressed that in light of COVID-19 social distancing is mandatory –  both according to law and the Torah. With preparations underway for Passover celebrations, Rabbi Weiss stated seders are to take place at home with only those who live under the same roof in attendance. No guests are allowed.

“I want to be abundantly clear,” he asserted, “No one should be traveling. More specifically, no one should be coming to Montreal from outside Canada including New York City, Brooklyn and other parts of the United States. In fact, the  Government of Quebec is forbidding travel within the province.”